These are events that I have been waiting for all my life. When I was about 9 years old or so, I read a book that described astronomical events and described when they would occur. The book said that there would be a transit of Venus on 2004 June 8, when Venus crosses in front of the Sun, and that another one would occur on 2012 June 5. Forty-eight years later, in 2004, the Transit came to the Science Museum. The local TV Channel 12 weatherman Andrew Freiden interviewed me at sunrise on TV about the transit, which had already been in progress for about 5 hours. I then looked fruitlessly for the Sun in an early morning fog. It finally began to shine through, and you can see parts of the fog in this picture (left). Shortly after this picture was taken, the fog obliterated the Sun just as the exit and the raindrop effect were about to take effect. Later on the Sun came out, but Venus was gone. One thing I note about the Sun is that outside of Venus, there were no spots; the Sun seemed to be clear of sunspots. There were two or three tiny ones in the center that did not show in this picture.

I expected that in 2012; since that transit was in the evening, there would be not much chance for a fog, but there could be thunderstorms and a lot of sunspots, since it occurs at the peak of the 11-year solar cycle. Sure enough, when I went to the Science Museum to do that one, clouds from rainbursts all day long were threatening the transit. Fortunately, from 6:05 pm until about 6:45 pm the clouds cleared enough so I could get the scope on the Sun. We saw a little nick eat at the Sun, then gradually evolve into a ball. This time we observed the raindrop effect; the second contact was delayed. Nate Eaton of TV Channel 8 came around and wanted to take a picture but his camera was much too large. The clouds came in at 6:45, however, and except for a brief look at 7:15 pm we didn't see the Sun again. At about 7:20 thick clouds from an approaching rainstorm covered everything at the Sun's altitude and below. But here are the two transits, 2004 and 2012. Venus transits always occur in pairs, over a century apart. Sorry, but the next one will not occur until 2117.

Most astronomical events involve bodies that seem still for moments at a time. The one exception to this is the meteor storm. You have to be alert when observing the meteors in a large meteor shower. The one I remember is on 2001 November 18 when the Leonids kept on coming; once I saw two meteors at once, and then a fraction of a second later another meteor. I recently wrote a musical composition to celebrate these showers, Meteor Shower Waltz. Click on that name and you will hear it, with the meteors nicely choreographed to the music.

Is it going to be clear tonight? The above image from Clear Dark Sky Clock by Attilla Danko, will show that. It is hard to tell from this graphic, although dark blue is clear and white is cloudy. But you can click on the graphic and get a more precise graphic. The top row gives the cloud cover and the bottom row the transparency, and the clock goes by hours out to about two days.

I have been interested in astronomy all my life. I have two telescopes, a 4-inch Schmidt-Cassegrain reflector Meade 2045, and a Celestron Nexstar 8 Schmidt-Cassegrain go-to reflector. I presently belong to the Richmond Astronomical Society. I have made trips to Baja California, Prince Edward Island, and Ocracoke Island, North Carolina to take pictures of interesting astronomical phenomena. Here are a sample of my collection 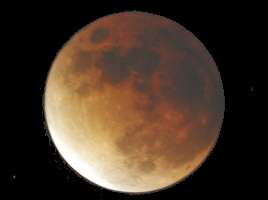 I was at the Science Museum of Virginia volunteering for their monthly Skywatch program for this eclipse. The eclipse was not very long, about 20 minutes. The lower left part of the moon remained bright throughout the eclipse as it was just barely in the umbra and was lit by the bright solar corona and other light going around the curve of the moon. The red color was about average for lunar eclipses I have seen, but I did have to brighten the photo slightly to bring out features on the right side of the moon. After the eclipse was over, I showed Mars and Saturn to museum visitors. The photograph was taken with an Olympus D460 Zoom digital camera, which I set manually on a 40 mm Plössl eyepiece on my Celestron Nexstar 8-inch telescope.

Mars came the closest to the Earth this year than it has for the past 50,000 or so years, but only by a few hundred miles. It made for a good show during the summer and autumn of 2003. When near its closest, I got this image by hooking up a Nikon FM-10 camera using an eyepiece (not prime) focus, with the eyepiece being a 15 mm Plössl eyepiece that I had just purchased the previous month at the Astronomical League Convention (ALCON) in Nashville, TN. The image had only occupied about a half-inch on my 4x6 inch photographs, so I scanned them in and combined two of them to form this image. The polar icecap is just barely visible on the lower right edge. The photograph was taken in Greece, NY, northwest of Rochester, about 12 midnight on the night of 2003 August 24/25. I suppose with a CCD camera and some digital manipulation, I would have obtained a much more resolute image. 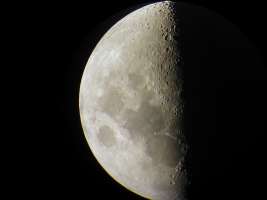 Digital cameras are making it even easier than ever to take impressive photographs of the heavens. The newest technique applies a high-tech device in a low-tech fashion. I was at a picnic at the Richmond Astronomical Society's 7-inch refractor telescope, which was pointed at the Moon. I simply walked up to the eyepiece with my Olympus D-460 digital camera and put the camera lens right on the eyepiece of the camera, using the LCD display to guide the camera to just the right position. When the picture looked perfect, I held still as I could and snapped. The result was this photo, in which details come out really sharp, aided by the ideal phase of first quarter.

Christmas Day Solar Eclipse, 2000 December 25. I saw this eclipse with my Meade 2045 telescope with a solar filter. The Moon took out about 40% of the Sun's disk as it gradually gobbled up sections of the Sun, including "Orion's Belt". The Sun had numerous sunspots at the time; they seemed to form an imitation of the constellation of Orion, with the "belt stars" being the largest: three sunspots in a row across the middle. On either side of this belt were two smaller sunspots which I called "Betelgeuse" and "Rigel", and the "Pleiades", a cluster of smaller sunspots, were lower on the disk. The Moon eclipsed all except Rigel and the Pleiades.

Space Shuttle Endeavour, 2000 November 30. It was supposed to launch at 2000 November 30 1006 EST. I went out to see it. Five minutes after this time, I saw a moving star to the south southeast. It got brighter and oranger as it went towards the east. I knew it had to be the shuttle. It was so low that it was in the trees. If this were July I would not have seen it. It went below Sirius and I noticed it was at least as bright as Sirius. It may have been slightly brighter but not as bright as Jupiter. 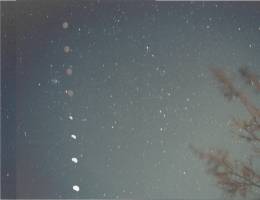 This is a multiple photo of the lunar eclipse of 2000 January 20, from Chester, Virginia. How I got this exposure was a long story; it is a composite put together on a computer from eight separate photos. It shows the moon going through partial, then total phases of the eclipse. The stars in the background are correct only for the last total eclipse image, for the stars along with the Moon moved while I was taking the pictures. 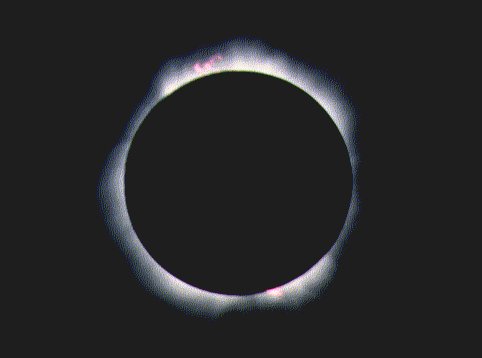 This is the ultimate solar eclipse of 1991 July 11 near a village in southern Baja California called Santiago. It shows the inner corona and two flares. The eclipse was so light that I did not need the flashlight to see things, and I had to hurry to get the picture because clouds came in quickly to cover the last two minutes out of 6 minutes and 53 seconds of totality. 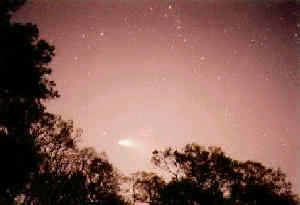 This view of Comet Hale-Bopp was taken about 1997 March 27 2000 hours EDTnear my home in Chester, Virginia. Comet Hale-Bopp was by far the brightest comet I have seen, even though it was always farther away than the Sun is. Comet Hyakutake in 1996 was much closer, only 9 million miles away. If Hale-Bopp had been that close, it would have approached a crescent moon in brightness and its tail would have been as thick as the moon and would have stretched all the way across the sky. 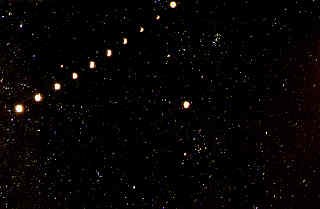 This is the lunar eclipse of the night of 1993 November 28. These shots were taken early on the 28th and 29th from about 2300 to about 0130 EDT. This is an example of a path chart, as it shows the path of the eclipsed moon across the sky as it waned to totality. The last image was of the total eclipse and was actually much fainter than this picture suggests. Still, it was unusually bright on one side. The image in the center was caused by bumping the camera. Lunar eclipses are less common than solar ones but more people have seen lunar eclipses because they are visible to an entire hemisphere at once. 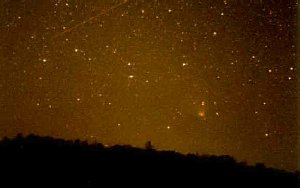 This is the comet that many people had waited years to see. I had first read about Comet Halley when I was a child; the book said it would return in 1986. It did but it went to the October part of our orbit when we were in the April side. Therefore the comet was far away and not very bright. It was also so far to the south that many Americans could not see it at all on this night of 1986 April 11. But I was able to see it just above the horizon along with trees and an airplane from Powhatan, Virginia. Comet Halley appears as a fuzzball without much of a tail. 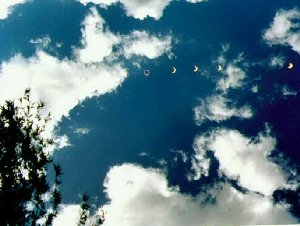 It is not too often that a solar eclipse passes directly over the place you live in. A near-total annular eclipse passed over my workplace at Fort Lee on 1984 May 30 but it was overcast and I saw only a mild darkening. This picture shows another annular eclipse on 1994 May 10 visible from the place I was born in: Rochester, New York. This picture, showing the phases of the Sun as it passed through annularity, was taken at my parents' home. On this date, the Moon was as far from the Earth as it gets, so it appeared so small that it could not cover the Sun but rather left a ring of Sun shining around it. 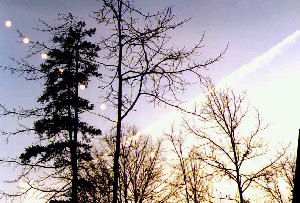 It happens every day. The Sun rises. The Sun sets. Here the Sun is shown setting through some trees in a winter sky with an old jet trail in the background. If I had taken the picture over several days (and left my camera out those days sitting on its tripod), I would have photographed the Sun making several parallel tracks through the sky, as the Sun's setting place moves from day to day along the horizon except at the solstices.

Back to Main Page